Oxfam is providing assistance to displaced people and the communities that host them in and around Nyal, both on the mainland and remote islands. With support from Irish Aid, the free canoe transportation program is offering transport to those people who need to journey to Nyal for food distributions or medical treatment. Oxfam provides vouchers for transport to those in need and train canoe operatives. The program also extends to assisting communities to seek refuge rapidly in an emergency and helps the canoe operators to earn the money they need to support their families. 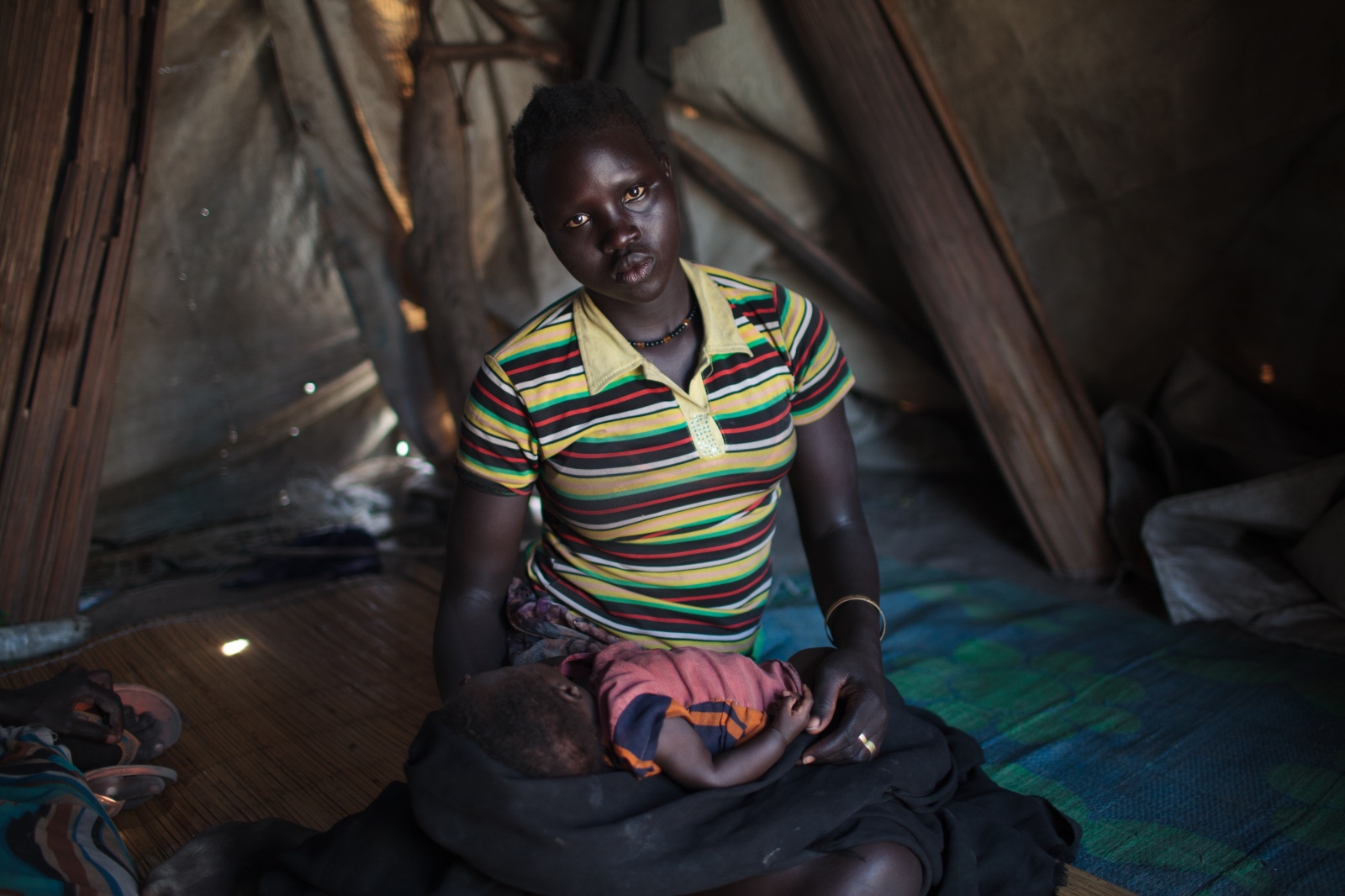 Nyaruach Matai with her child at one of the island in the swamps in Unity State. She is a young mother who came to this Island, in February 2017, from Koch in Leer County. She said due to the frightening things she experienced in Leer, she didnâ€™t want to go to the mainland. â€œWe have been sharing the small catch from the river with the host community since we arrived. Itâ€™s much safer here and I donâ€™t intend to return to the mainland or to back to Leer any time soon.â€ 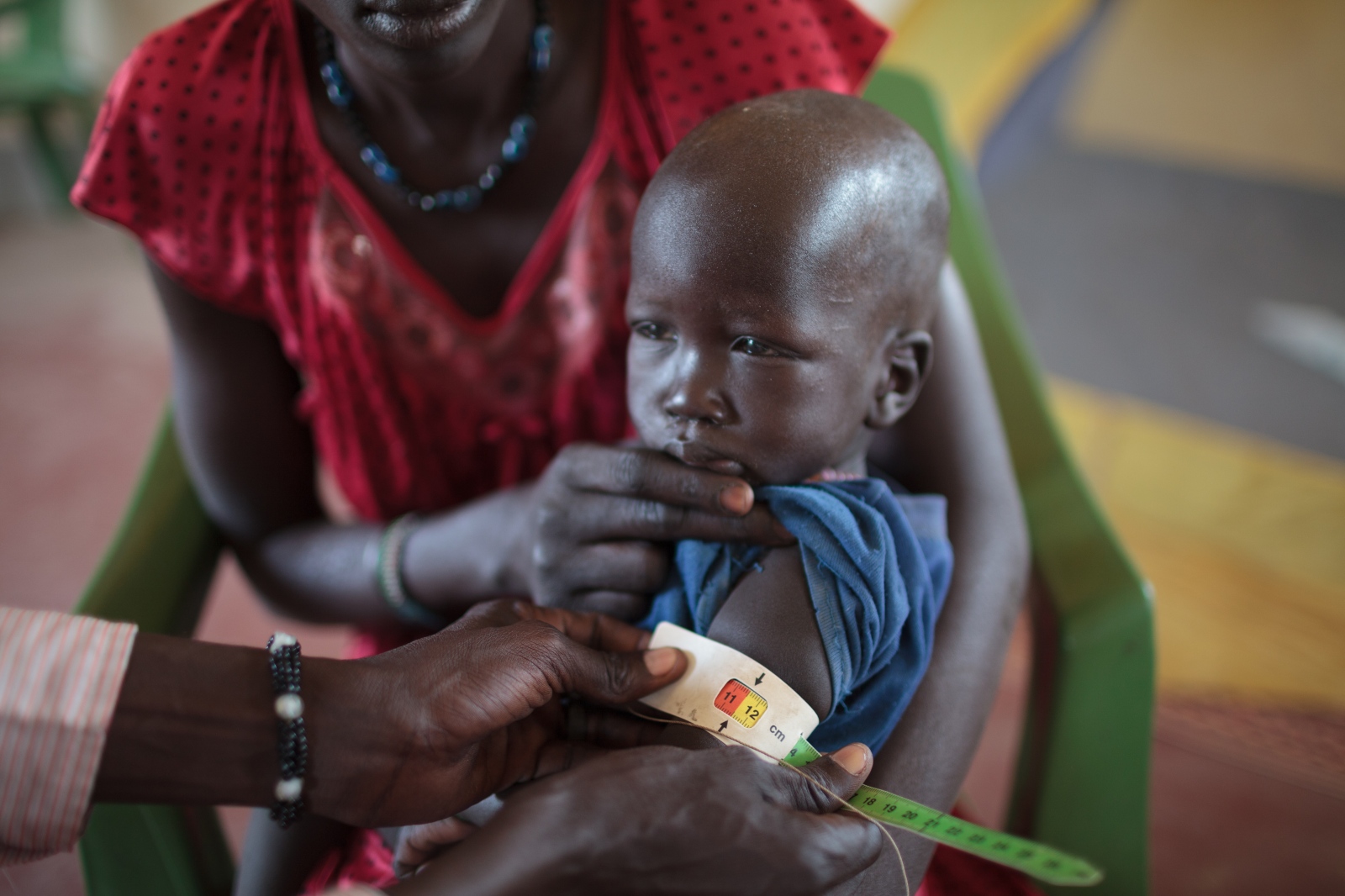 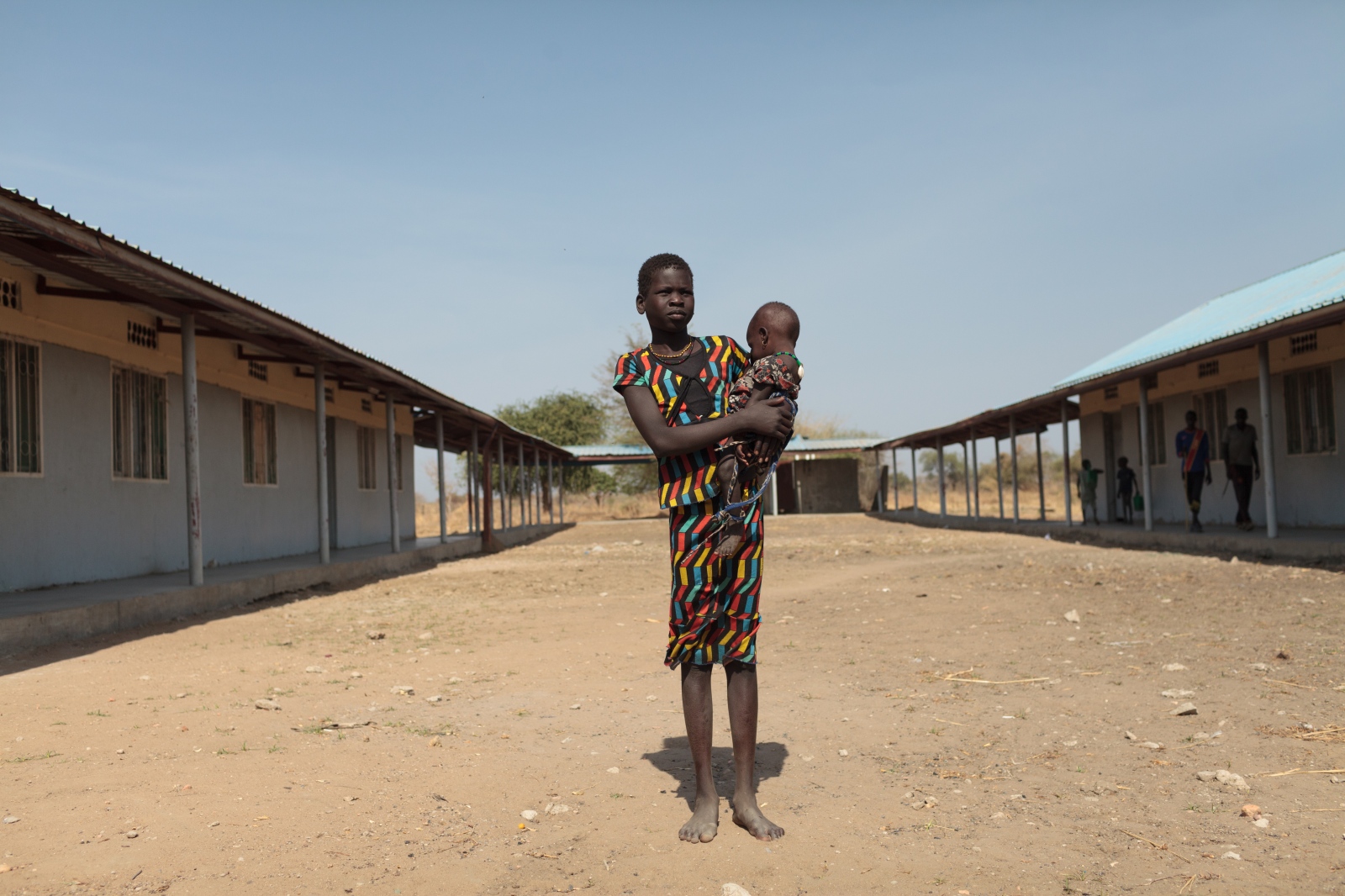 Nyaliah Kong carrying her sister Nyachan Kong. At young age, she has to take up responsibilities of taking care of her sibling. Their mother has been looking for something to feed the family so she had to bring her sister to hospital from a 1 hour walk through the forest. She had to make that sacrifice otherwise things get worst for her. She however has a clear vision of what she need, becoming a doctor and treat children like her sister some day. 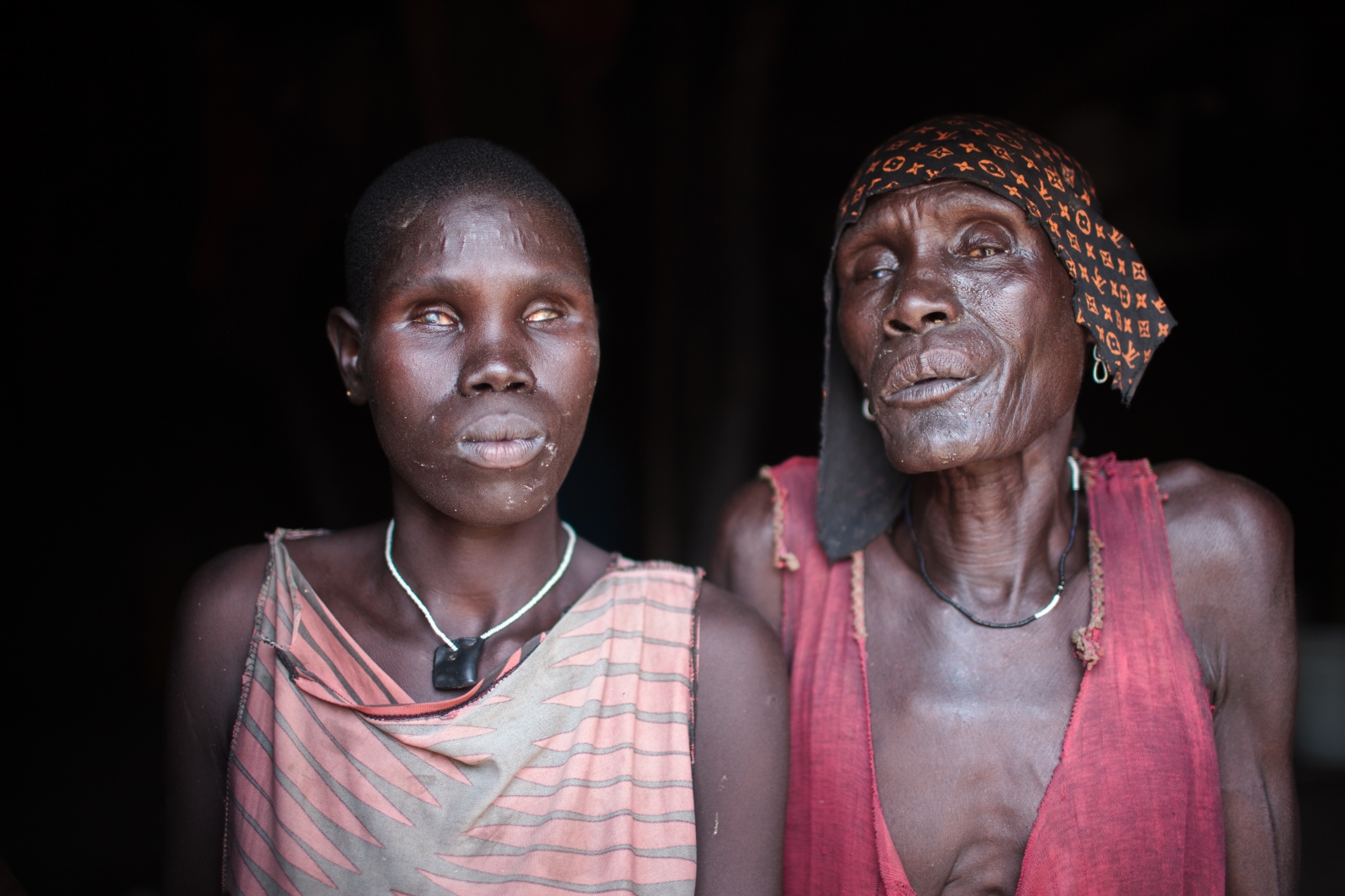 Nyanding Kai has stayed in Thorbil Island for many years. She is the host who has been welcoming new IDPs and other people from the mainland. Most of her children are in their own homes but she lives with one who is blind. Nyayok Liah her daughter got blind when she was 5 or 6 years from Measles. â€œShe is my blind one,â€ she said referring to her daughter. â€œBeen like this now for many years, if I do not take care of her no one will, this is the main reason i have been in the islands to take care of her.â€ 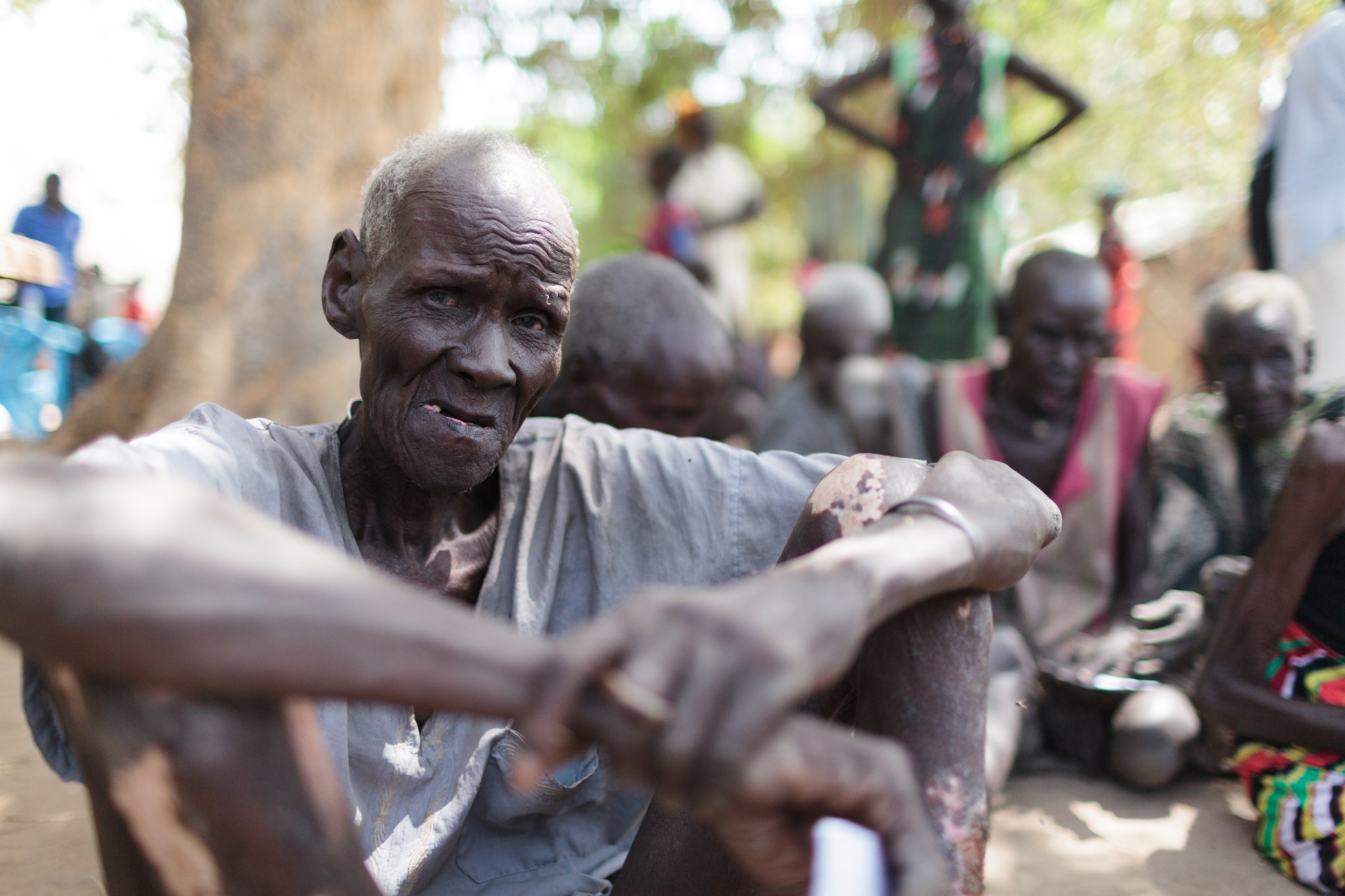 Majok Bichok, age unknow, at the World Food Program registration site in Nyal. He had to make a one and half hour trek helped by family members from his residence in Nyandong to Nyal to ensure he was physically present for the registration. His hope is for WFP to help him soon. 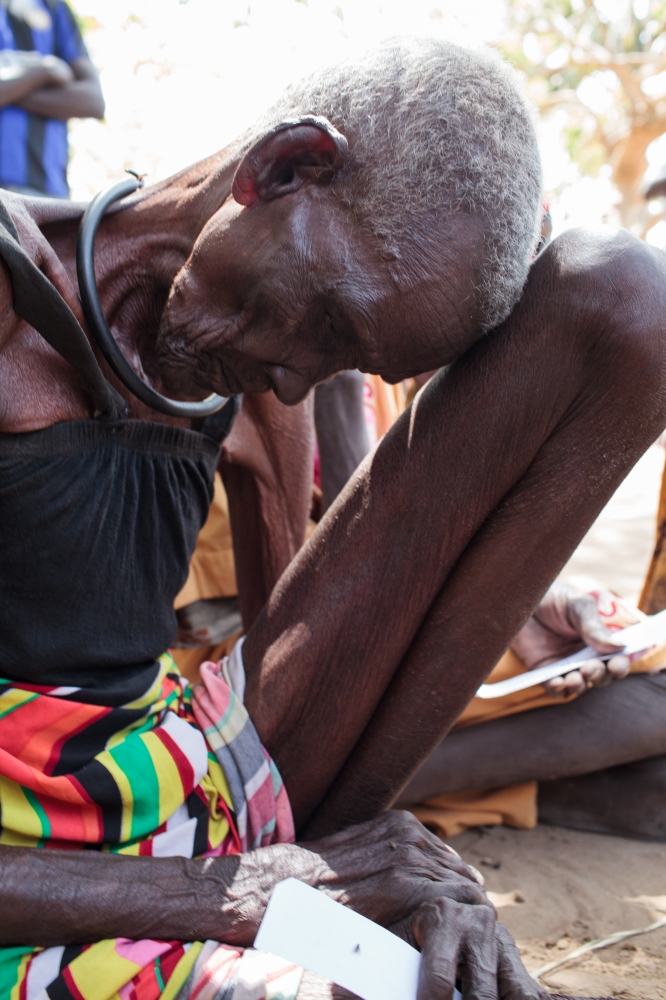 Elderly woman at the risgistration site in Nyals Catholic church, she came from Nyandong Payam with the help of family members. 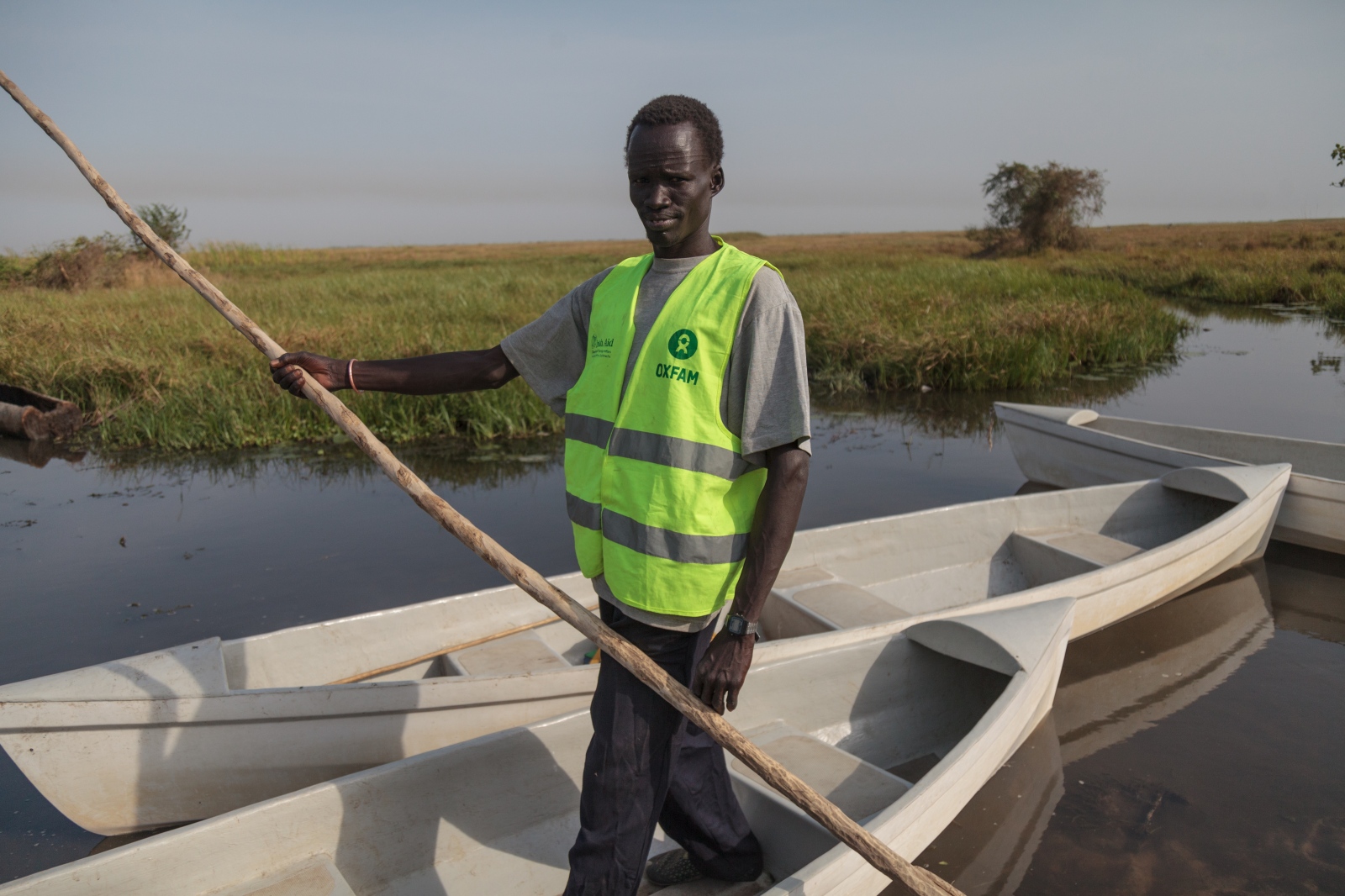 Oxfam has employed boat operators through its protection committee to ferry vulnerable groups to and from the islands. With the scarcity of boats and the inability of the vulnerable groups like IDPS, Aged, children, the disables and sick seeking medical attention, Oxfam came in to give such assistance in this fragile context. One of these boat operators is Gabrial Puol Thiel. He has been with Oxfam for the last 2 years since 2015, transporting the vulnerable to and from the islands. â€œI have been transporting the vulnerable people since I started working with Oxfam including their food and NFIs to and from the Island. We have about 37 or so such islands here. My main motivation is the fact that I am doing this to my people during this crisis in South Sudan. I feel some sense of achievement when sometimes I carry a sick person to the hospital in the mainland and get treated, when I get some food to an elderly person who could have died of hunger and save that life. There are children who have been separated with their parents since the conflict and without this little assistance it would have been hard for them to do anything. This is what motivates me in doing this job.â€ 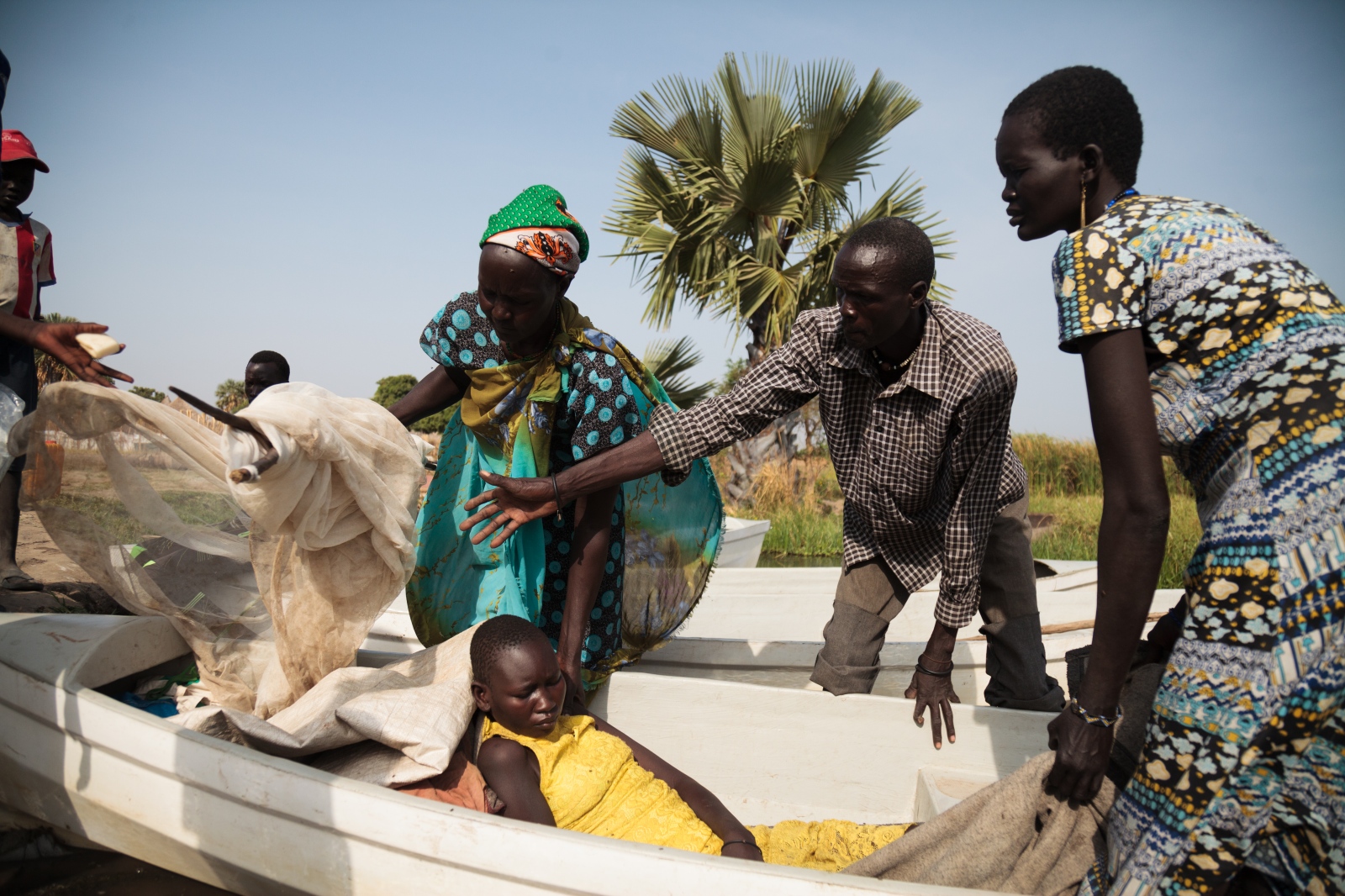 Nyadak being assisted to settle well into the boat before the journey began. She will have to lie on her back for the entire journey.Â She has been paralyzed since 2013 when doctors prescribed her of having Brucellosis and syphilis. 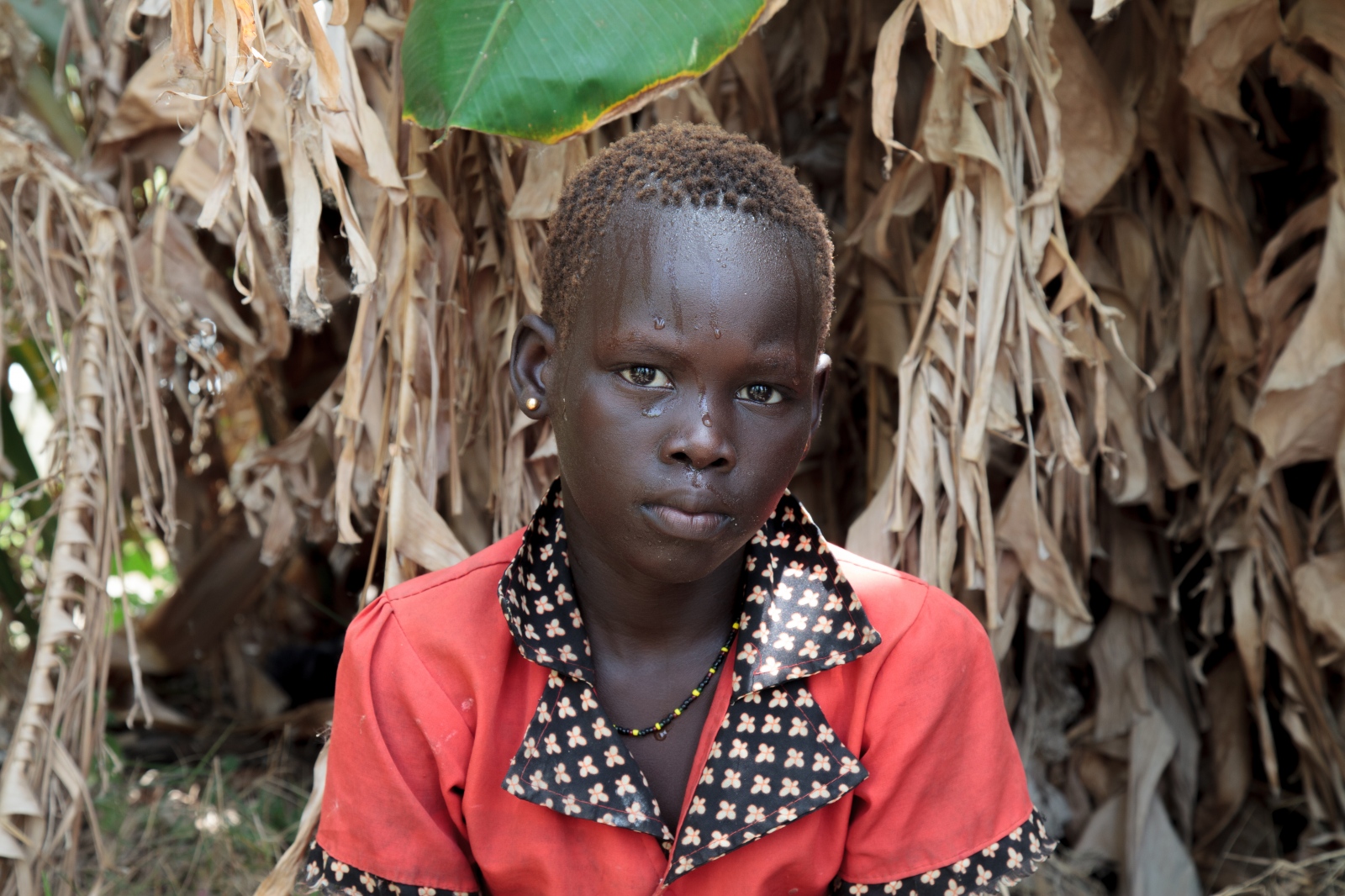 After taking a rest at the island at Thorbiel Island, Nyadak talks to Kujiek Ruot Kuajien and narrates what she does daily taking care of her mother; her dreams too seem to hang on her shoulders.â€œThe main reason we went to the island was because we were told there might be an attacked and all of us shall be killed. I do not know where my father is and siblings. I came with mum here since she is sick and cannot run in case of any problems on the mainland. My daily routine is to ensure I make food for her, take her to the toilet since she has no power to do so. The food we get here comes from Kawaini (white people referring to Oxfam). They bring us with these white boats. I do not know their names. They are the same people who came and took us for the registration; if they did not come we would have missed out. I just want to thank them for doing that. I cannot manage to fish or get lilies in the swamps so when there is no food we rely on people from the island who share the little they got with us. This is how we do our life. I have never gone to school. Since my mother got sick the thought of ever going to school is next to impossible especially now. My young brother is in school in Garbec. If I get the chance to go to school, I would like to be a doctor so that I can treat people like my mother who are suffering from diseases.â€ 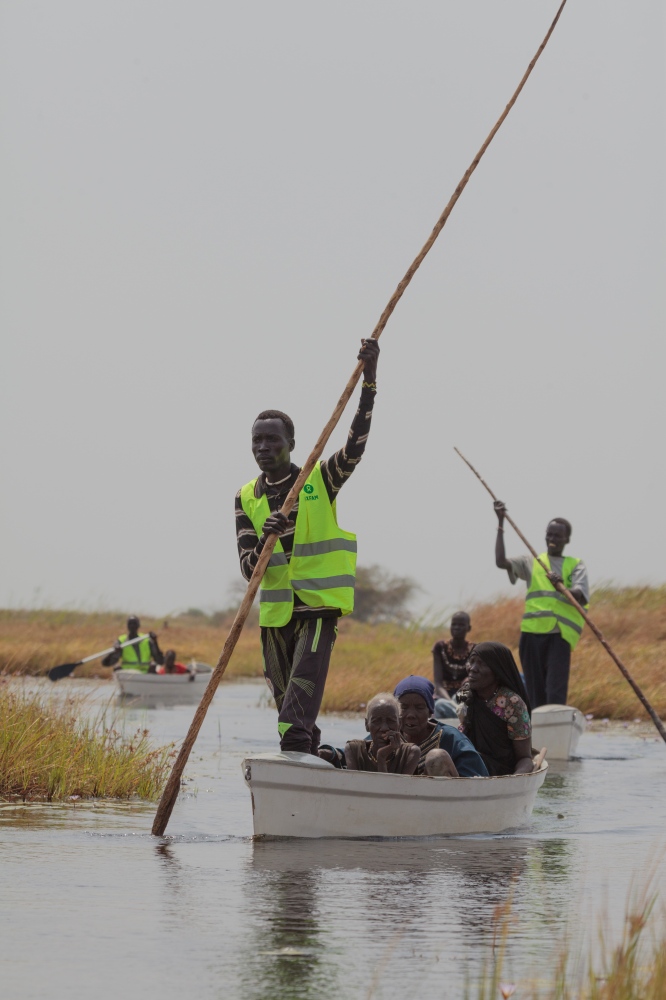 The convoy of Oxfam riders takes on the boat against the still waters of the swamps. They are determined to take the vulnerable to their homes. The only motivation they said is doing it for their beloved people. At journey requires them to be not so far from each other to man any challenges that might occur with one of the boat. They also talk, sometimes sing traditional or long ago songs as a source of encouragement to overcome the thought of tiredness between the distances. 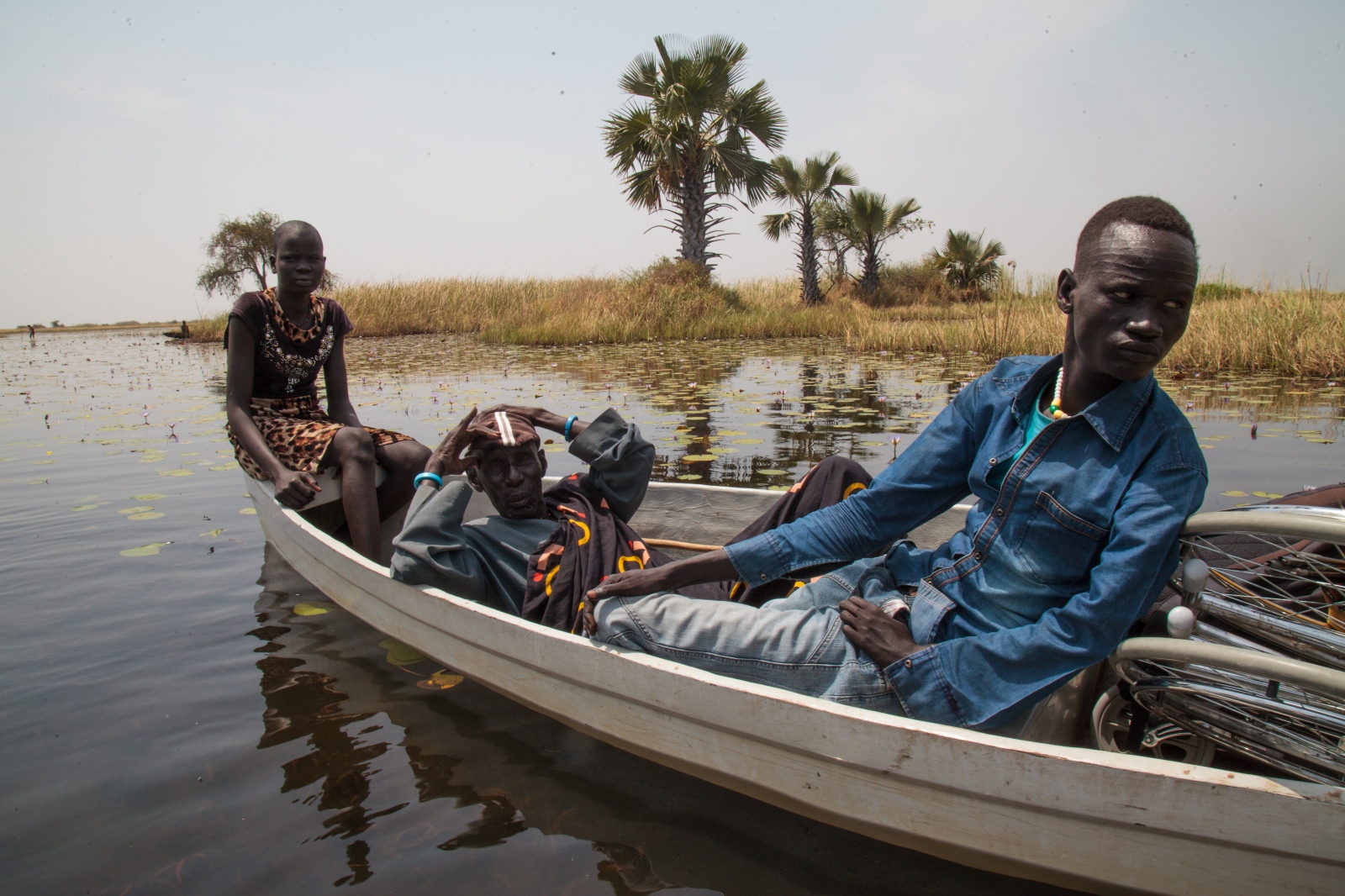 An Oxfam wash personnel (right) going with the team to the islands where he is based with other colleagues to monitor and do hygiene promotion in the islands. Next to him is a wheel chair for a vulnerable woman who has been paralyzed by an ailment. 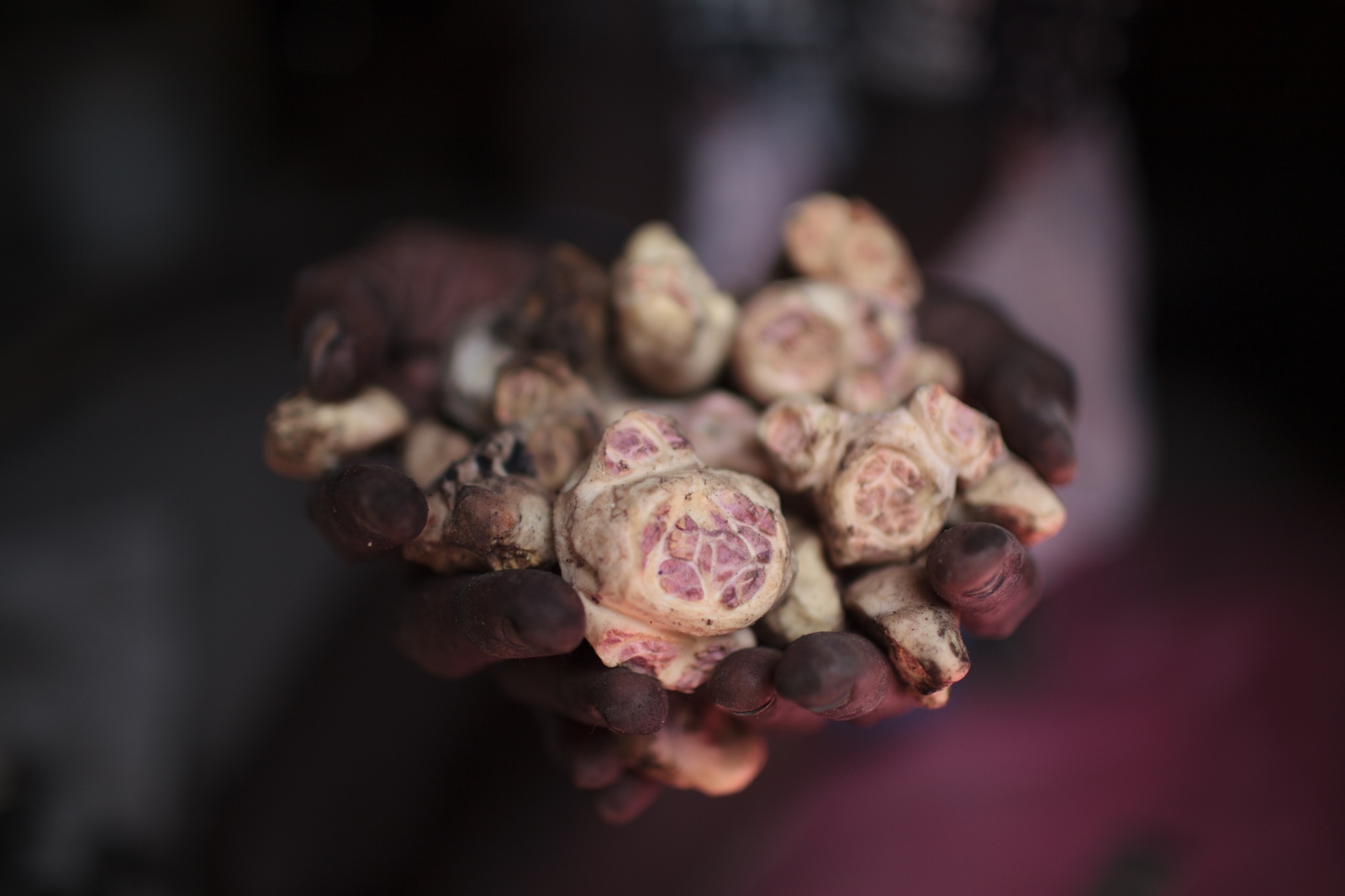 â€˜Keayâ€™ as it is known here by the locals, a type of tuber that grows with lilies in the river that people eat as a means of copying strategy when there is no food due to famine, conflicts and other calamities. 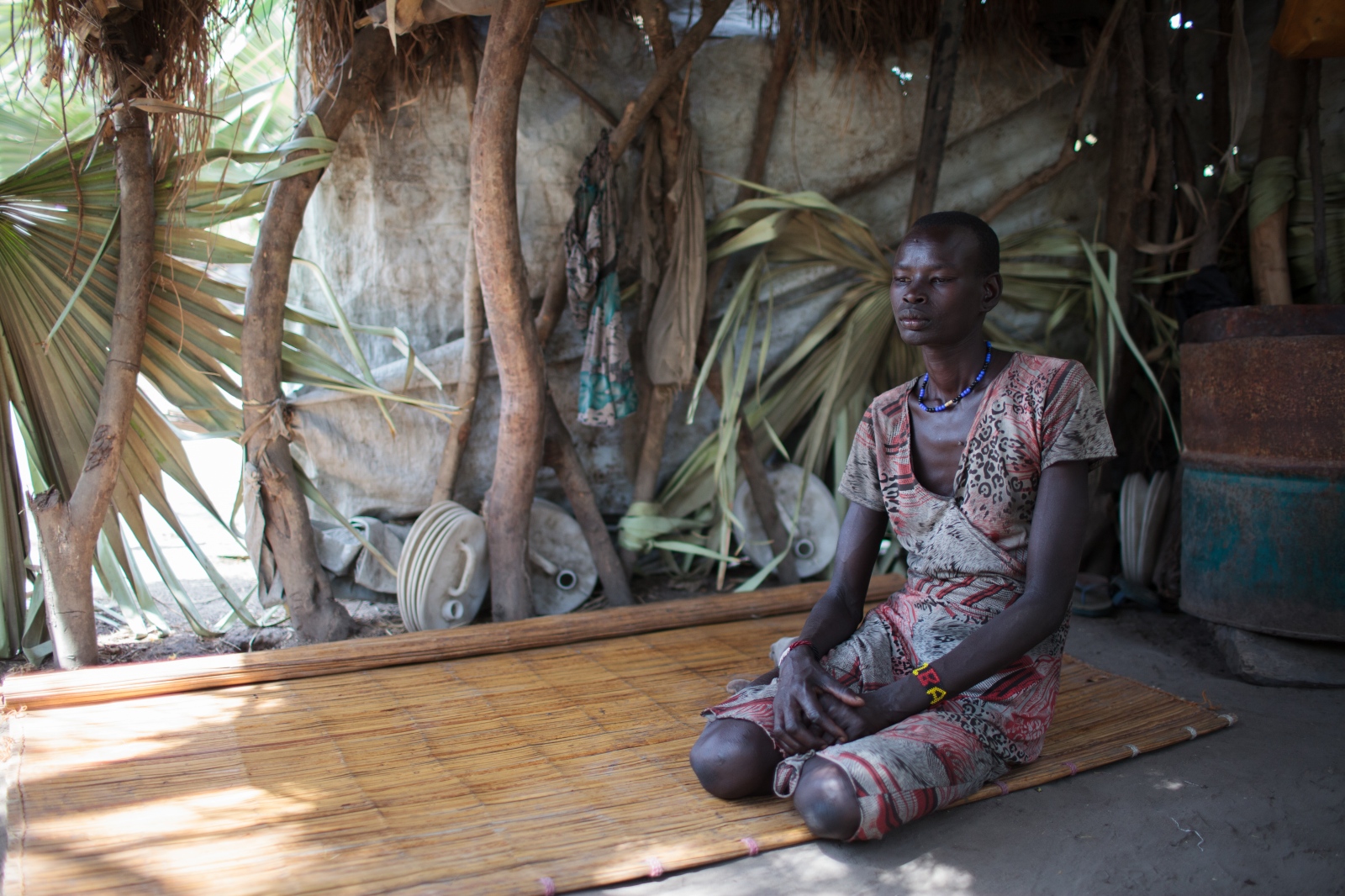 Nyabor Puot and IDP from Thorbuoni in Mayandit does not know the where about of her husband. She said when there is peace she can go back home since it is not easy living at such conditions now. She left her nice Tukul home to live in such a structure as she is now in. She also only survives on water lilies and Keay which is really too much reduction in her living conditions. 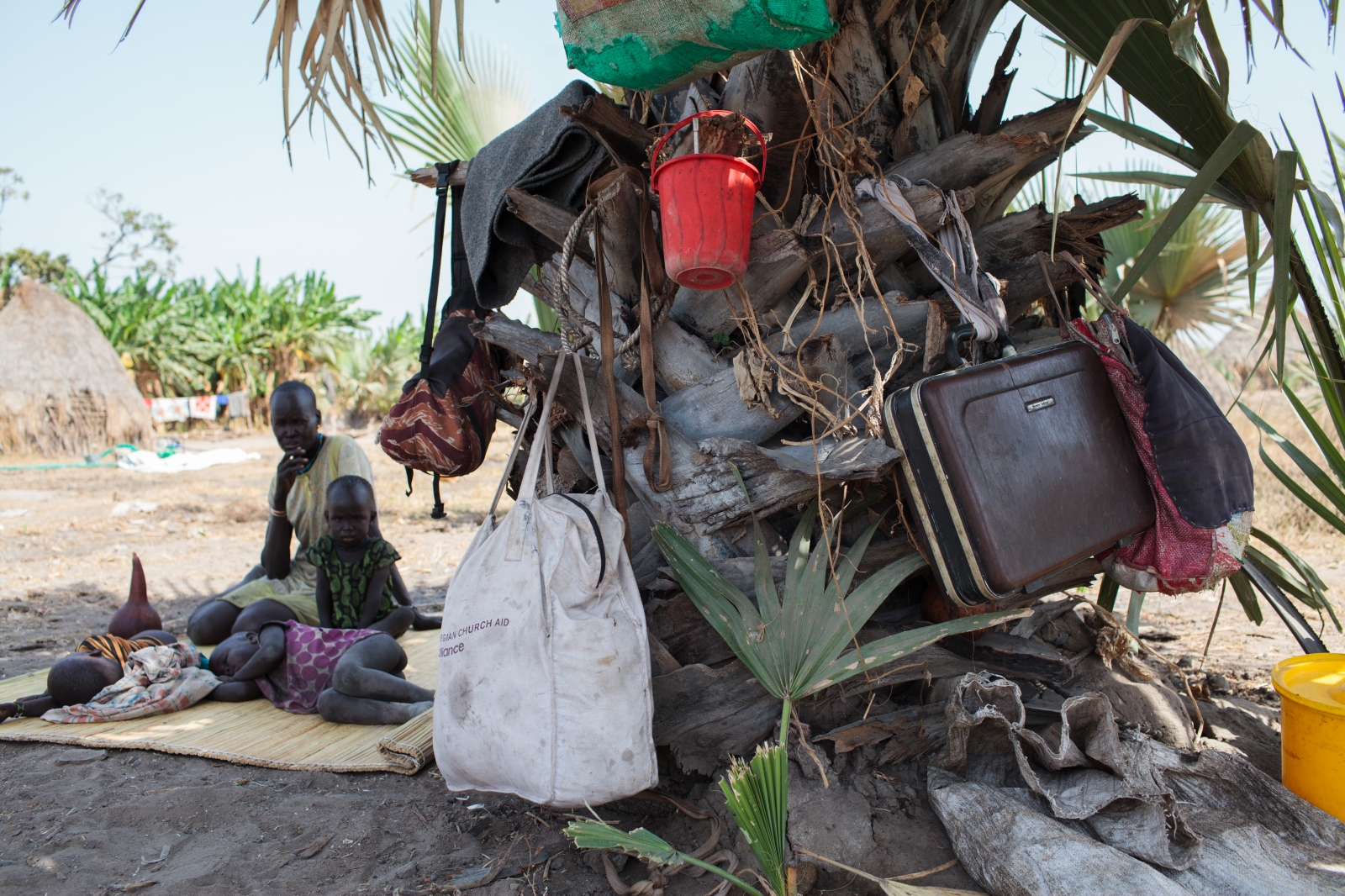 Belongings of the IDPs which were the only ones they could manage to carry with themselves from the journey. The host at the island could only afford a mat for them to sit on by the time of our arrival. 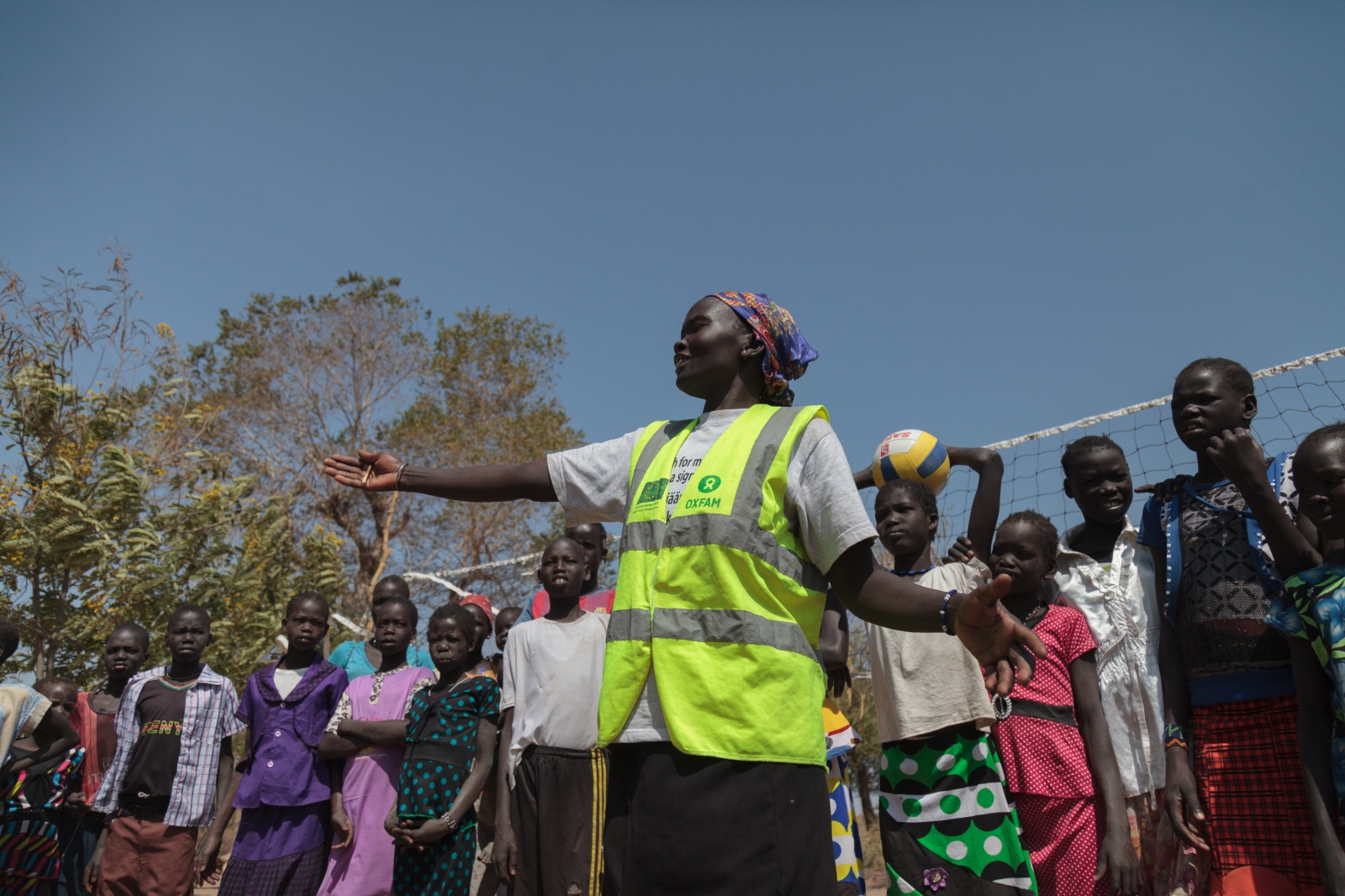 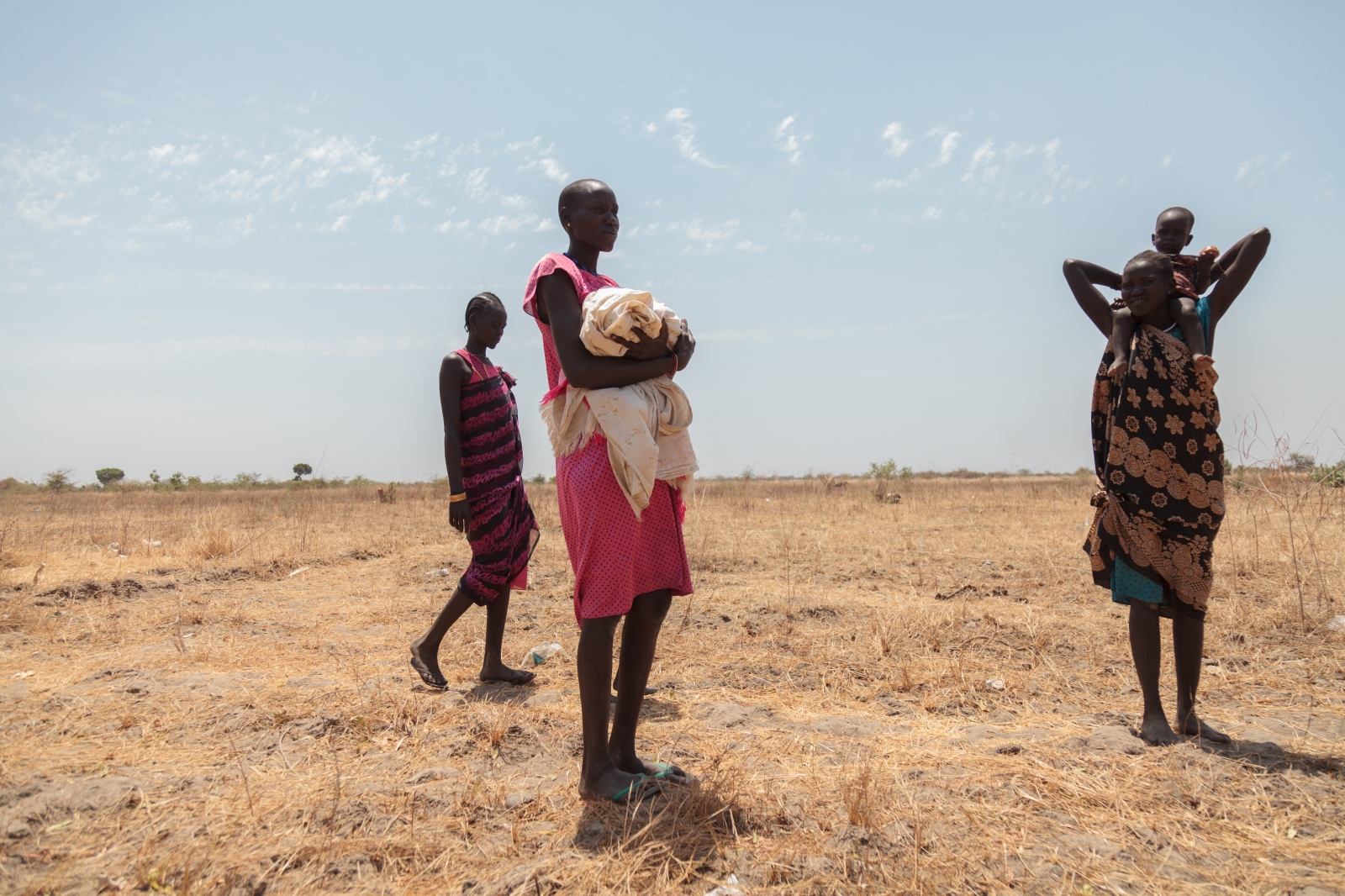 Women and children from Mayandit that arrived in Garbec. They walked for close to 5 or 6 days before getting to their current location. 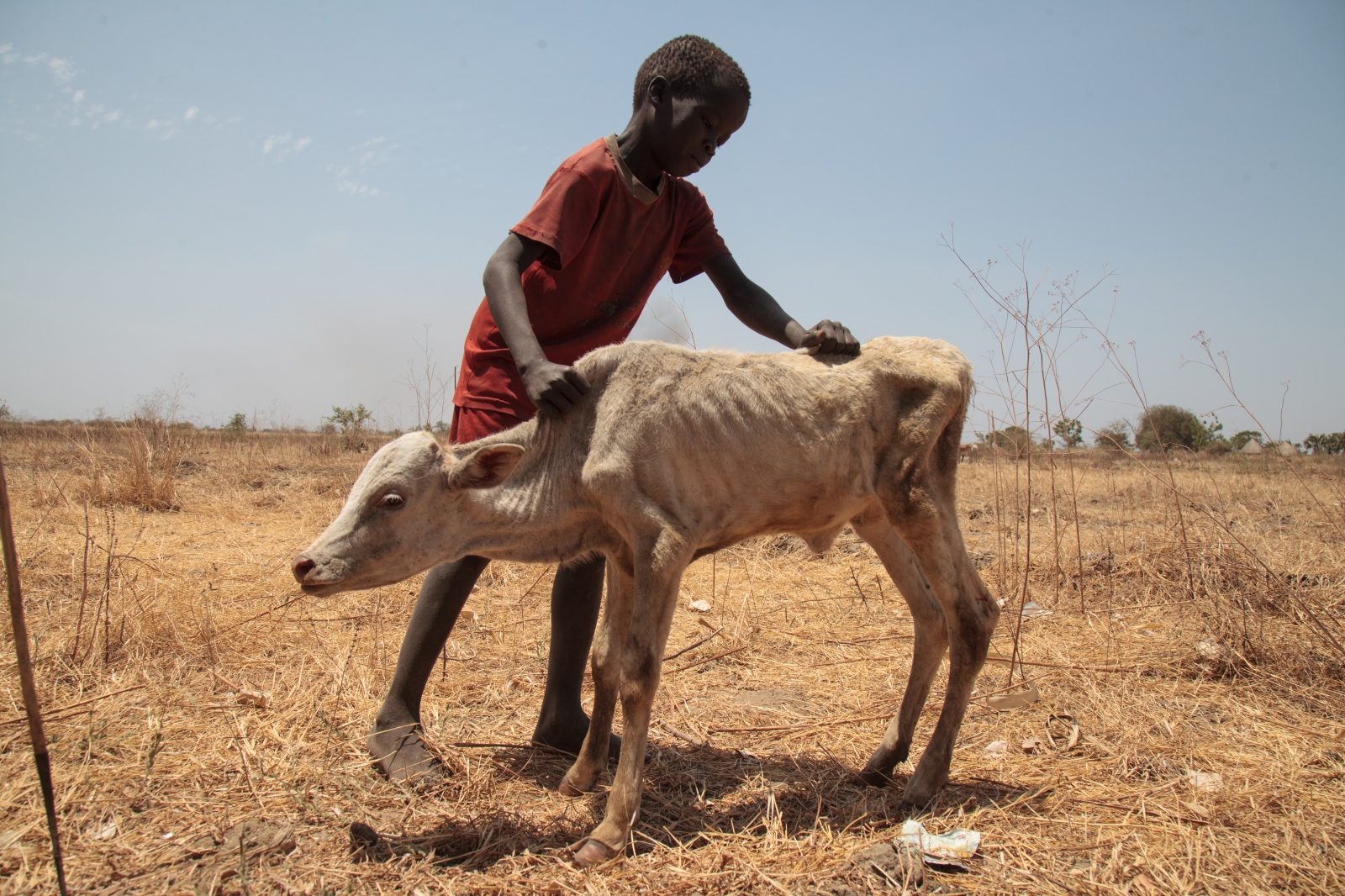 Marol Gek Tap from Kuer in Mayandit seemingly taking care of his calves after walking with it for the long period. Both must have been luck to reach the Garbek alive. â€œI miss my class, i am in class 1 B. All my books are back in Mayandit. I want to go back to school so that one day i shall become a teacher.â€ He said as he continued to tender is animal. According to the group that has arrived, several children, animals, women and men are still on the way. They used plastic sheets to float most of them across the river, held by some strong men on the sides to cross the river. 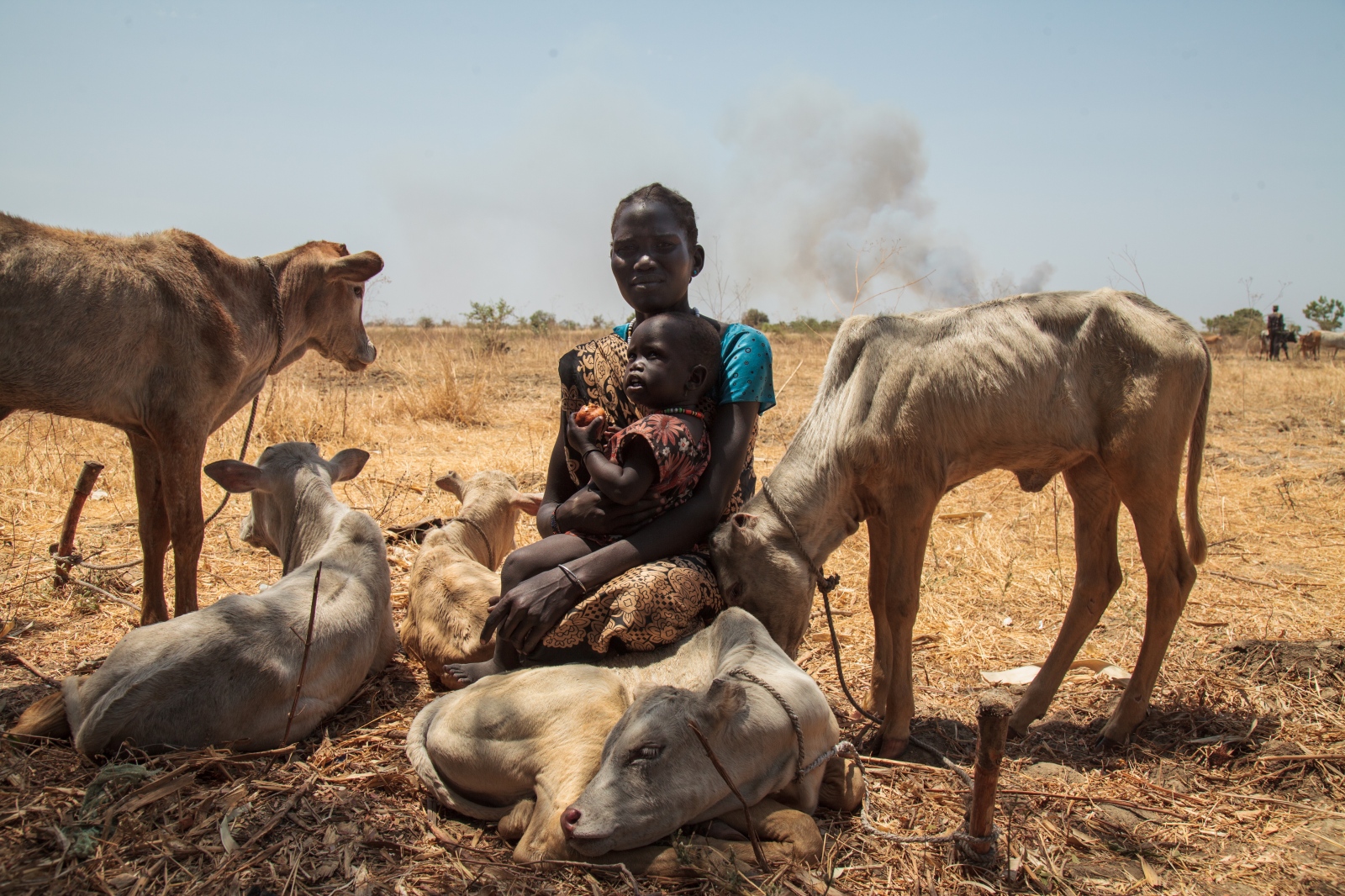 March 6, 2017 â€“ Unity, South Sudan. Tabitha Nyawich Kong in Nyal, after fleeing conflict in her village. â€œWe were chased from our residence in Buor Payam, Mayandit. When it happened, I wished I hadnâ€™t returned the year prior. It is so unfortunate that the conflict resurfaced. I donâ€™t think I will go back until I am sure itâ€™s safe. Most of our animals died on the way but it was the children and the elderly who had the hardest time. Those who couldnâ€™t run were left behind -- hopefully theyâ€™ll survive. We fed on water lilies, â€˜Keayâ€™, fish and anything we could find in the riverâ€.